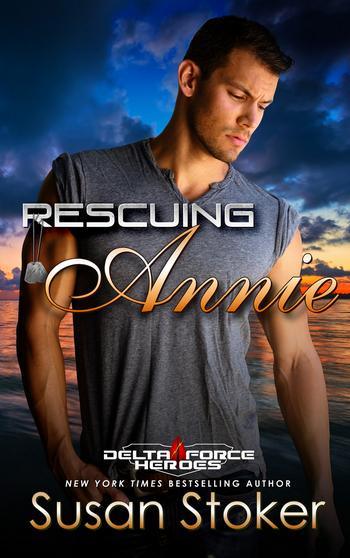 Annie Fletcher has known what she’s wanted to do since she was seven years old...a special forces soldier just like her dad. But now that she’s one of the very few women in the ranks of the elite Green Berets, she isn't sure she wants the role anymore. But the last thing she wants to do is disappoint her father. Or his Delta Force teammates, who are all like uncles to her.

She wants to live her life with her fiancé, Frankie. Wants to marry him. Wants to stay in one place longer than two years. As complicated as her life is, she’s always had Frankie by her side. And while she might be a badass soldier, Frankie isn't exactly a slouch when it comes to looking out for her…which is a good thing considering the situation they find themselves in while on vacation.

(You have all been asking for Annie’s story forever…and here it is! Some have suggested this story should be called Rescuing Frankie…but no matter how accomplished we are, no matter how smart or tough or strong…we all need someone to have our backs, to rescue us when we need it most. Annie is no different. Enjoy!)

**Rescuing Annie is a full length book in the Delta Force Heroes Series. Each book is a stand-alone, with no cliffhanger endings.


Captain Ann Fletcher looked around, struggling to understand how everything had gone to shit so quickly. She and her Green Beret Special Forces squad had gone out to do some reconnaissance…and somehow found themselves in the middle of a firefight.

They’d arrived in eastern Afghanistan a week ago and had spent the time since getting caught up with the layout of the area and their target’s movements and followers. A raid was in the planning stage for ten days from now. Ann and her squad were going to lead about a hundred Afghani commandos in an attempt to kill or capture Sahib Lal Wakil. He was the newest leader of the local Taliban group, and one of the most brutal. Reports alleged that he hadn’t hesitated to kill his own son, who’d contradicted him in front of his followers.

Ann and her squad had arrived in the country and immediately gotten to work meeting with Afghani officials, trying to come up with the best way to get to Wakil. He was holed up in a small town in the middle of a large mountain range. Getting to him wouldn’t be easy as the location he’d chosen for his home base was almost impossible to approach without notice. The quickest way to get to the location was by helicopter, but as soon as the chopper got anywhere near the location, Wakil and his followers would know, which made it extremely risky. Despite the risk, the information that would be gathered on the location of Wakil’s men and how many followers the terrorist actually had would be invaluable to defeating him once and for all.

Today was supposed to be a recon of the valley they’d have to cross just to get to the village where Wakil was located. But the simple reconnaissance had turned into a full-blown firefight.

The team had been dropped off without incident, but shortly after they began to make their way across, they’d been attacked by heavy artillery fire while in the narrow valley and had retreated up the side of the mountain, opposite of where Wakil’s forces had taken up positions. While they’d been engaging the insurgents, Wakil had sent some of his men closer to the Green Beret’s position, effectively surrounding them and cutting them off from any retreat. It was taking everything Ann and her team had to keep from being picked off one by one.

As it was, two of Ann’s six teammates had been injured and there seemed to be no lessening of the attack. They were making their shots count, and not firing indiscriminately, but for every insurgent they took out, it seemed another immediately took his place.

“Bell! Did you get a hold of air support?” Ann yelled.

“Ten-four!” Sergeant Charlie Bell shouted back, straining to be heard above the sounds of gunfire the others were laying down. “Two minutes and counting!”

Ann nodded as she concentrated on tightening the tourniquet around Green’s leg. She had the most medical experience out of everyone on the team, and had taken it upon herself to do what she could for her teammate. Keeping one eye open for the enemy, she divided her attention between working on Green and making sure no one tried to climb up to the ridge where they’d taken refuge. Green had been hit in the knee by a sniper bullet. Her tourniquet was doing what it was supposed to, namely keeping him from bleeding to death, but he definitely would need more intensive medical attention.

Unfortunately, the longer they stayed on this ridge, the higher the chance none of them would make it out alive. Shef’s left arm had been taken out of commission by one of the snipers as well, but luckily he was right-handed and he hadn’t stopped firing back.

Bits and pieces of rock flew all around them as bullets hit the mountainside. The air was heavy with dust as the shots hit rocks and dirt, making it harder and harder to see the enemy, but that also made it more difficult for others to see them, which could work in their favor. Still, Ann needed their air support to get there now. They might not have two minutes. The team was literally sitting ducks. They were spread out along the ridge, doing their best to use the large boulders as cover as they returned fire, trying to take out the snipers.

Seven Special Forces soldiers against who knew how many terrorists weren’t good odds. All it would take was one rocket-propelled grenade and they’d all be blown to bits.

Amazingly, Ann didn’t panic. Instead, her concentration sharpened. The volley of gunfire faded into the background as she made sure the tourniquet on Green’s leg was holding. When she was done, the sergeant didn’t hesitate to get right back into the fray. Ann could smell Green’s blood that had seeped into her uniform and smeared on her hands. She smelled her own sweat and the stench of the dirt and sand. It seemed as if the worse the odds got, the more steady she became.

“Twenty seconds!” Bell shouted, warning everyone that the shit was about to hit the fan.

Ann knew as well as anyone that the chances of them getting out of this clusterfuck alive was slim to none. Even with air support coming in to drop artillery on the coordinates Bell gave the pilots, being extracted wasn’t guaranteed.

Even so, the sound of the Blackhawk helicopters coming in hot and hard over the ridge toward them was as sweet as anything Ann had ever heard. The firepower the helicopters laid down was impressive, and scary. The airstrikes were coming way too close to their location for comfort, but it was necessary to keep the insurgents from overrunning their position.

Four hours later, all seven of the Green Berets were wounded in one way or another. The helicopters had done their job, keeping the insurgents from overrunning their position. The fire they were taking had lessened, but not enough for Ann’s team to safely extricate themselves on foot. The enemy snipers were still doing their best to pick them off and that, along with the injuries the team had suffered, made a chopper the only way for them to get out of the area.

Green wasn’t doing well and should’ve been extracted hours ago. Ann had wanted to stay on the move, making it harder for the snipers to hit their mark, but with the injuries sustained by her team, it was a better idea to stay put. She’d done her best to keep Green comfortable, even as he and Shef continued to fight.

Joe had slipped on the rocks, resulting in bruised or broken ribs. She knew the guys would give him shit for that for years to come. Gabe had been grazed in the head by a sniper. If he hadn’t turned to look at Green at the last second, the bullet would’ve gone right through his forehead. Bell’s right hand had taken a direct hit. He’d been signing to Gabe and one of the enemy snipers had gotten in a lucky shot. Mack had also been hit, but the bullet had gone through the fleshy part of his upper arm.

Ann herself hadn’t gotten away unscathed. She and Bell had been scrambling to switch positions as Wakil’s men crept closer during a lull in the air strikes and she’d tripped. It was stupid; she was running and had simply lost her footing, slamming her forehead into the ground. She was never going to live that down, but she wouldn’t mind the ribbing from her teammates if she made it out alive. Even with her Kevlar helmet on, she’d torn off a good chunk of skin over her eyebrow. She’d been dealing with blood dripping into her eye ever since. But that hadn’t stopped her from taking out her fair share of insurgents.

Finally, it was time to get the hell out. The extraction from their current position wasn’t going to be easy. The choppers would take a lot of enemy fire and Ann and her team would be exposed. But dusk was setting in, and they needed to get out of there before it was completely dark. Wakil’s men knew this land much better than they did, and while the darkness could cover the team’s movements, possibly allowing them to sneak out, it would do the same for the enemy, allowing them to ambush the Green Berets.

As the highest-ranking soldier of the group, Ann was used to making decisions for the team. She didn’t always like doing so, but she never shirked her duty.

“When the first chopper comes in, I’ll take Green while, Mack, you and Gabe lay down cover fire for us. Joe, I need you to help Shef,” Ann told her team. “It looks like there will be two separate extractions. With the number of door gunners necessary, we won’t all fit in one chopper. Once the first helo is gone, we’ll reassess and Bell will coordinate with the second team of Night Stalkers. There will only be a few minutes between choppers, so we won’t be waiting for long. We’re all gonna get out of here. Together. Hear me?”

Ann couldn’t stop the chuckle that rose up at Mack’s words. He was always hungry. It wasn’t too surprising as he was a big son-of-a-bitch. She was just glad she wouldn’t have to carry his ass out of here. She was strong, but at over two hundred and fifty pounds to her one fifty, Green would be a challenge to extract.