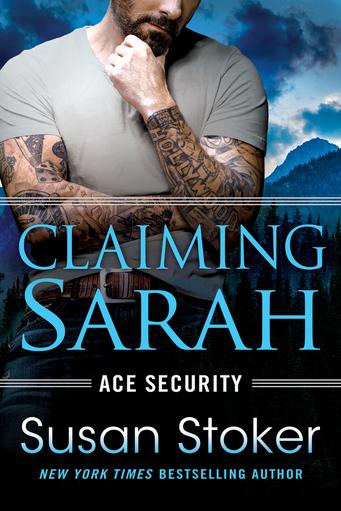 All defenses are down in the fifth Ace Security novel from New York Times bestselling author Susan Stoker.

Sarah Butler isn’t flattered. She’s angry and unnerved. She’s been getting intimate gifts from a man she barely knows. Nothing threatening yet, but there’s just a weird vibe she can’t ignore. Her recourse is Ace Security. Their solution: self-defense lessons at Rock Hard Gym with a personal, hands-on instructor. One look at the bearded, tattooed, green-eyed alpha is enough to take Sarah’s breath away.

Cole Johnson is definitely the man for the job. He’s eager to train her. Eager to get closer. And when it comes to Sarah’s instincts, Cole knows she’s not imagining things. He’s also not imagining the intense attraction between them—and his desire to protect her is growing. But so are Sarah’s fears, the worst of which come true when she disappears.

Enlisting the help of Ace Security, Cole will stop at nothing to find the love of his life…before she vanishes forever.

“I seriously don’t have time for this shit.”

Sarah winced, but kept her eyes on her purse sitting in her lap. She was exhausted after a grueling twelve-hour shift, but hadn’t even considered calling off the meeting. She needed this.

She’d come into the Rock Hard Gym right on time and told the receptionist who she was and that she had an appointment with Cole Johnson. The young woman had looked surprised but told her to take a seat and she’d go talk to the man.

Sarah had sat on a surprisingly comfortable chair in the lobby of the gym as the receptionist walked past her, partway down a hallway to the left of the lobby, and entered an office.

She’d closed the door, but it didn’t latch, making it easy for Sarah to hear the conversation between the woman and Cole.

“Is Trina around? Can she take this for me?”

“You said she could leave early today, remember? It’s her birthday, and her boyfriend wanted to take her out.”

“Last I saw it, it was on the corner of your desk, but that was about five pounds of papers ago.”

Sarah heard the humor in the college-aged woman’s tone, but couldn’t even muster enough energy to smile. The weight of the world seemed to be sitting on Sarah’s shoulders, and she wasn’t sure she could keep up her usual sunny disposition.

The man she had an appointment with and the receptionist continued speaking.

“God, this place is a mess. How long is her appointment supposed to be for?”

“I think it’s scheduled for an hour.”

“Damn. I literally don’t have an hour. I have an interview in thirty minutes.”

The receptionist must have given him a reproachful look, because Cole said defensively, “Hey, I thought I was free. And besides, he couldn’t come in until now because of his other part-time job.”

“What do you want me to tell her?”

“Tell her I had an emergency come up, and see if she can reschedule.”

Sarah had heard enough. The last thing she wanted was to be a burden to anyone. But she also wasn’t going to sit around any longer and listen to this guy make up excuses and lies for why he didn’t want to keep their appointment.

In order to prevent the poor receptionist from having to lie to her, Sarah quietly stood and headed for the front door of the gym. It was probably for the best anyway. It was getting dark outside, and she hated to be out and about after the sun went down. She didn’t feel safe.

Not that she felt particularly safe any time of day anymore.

She was pushing open the doors when she heard the receptionist call out her name. For once, Sarah didn’t bother to be polite. She kept going without turning around.

Castle Rock, Colorado, was a pretty small town. The downtown area was eclectic and welcoming. There was a park at one end and a small Italian restaurant she’d heard wonderful things about. A coffee shop was across from Rock Hard Gym, and there was a bar called Rock ’N’ Roll a few spaces down as well. Several other independently owned stores made up the rest of the downtown area.

Looking around, Sarah didn’t see anyone lurking about. She took out her key chain and hooked her middle and pointer fingers through the eyeholes in the cute metal cat head. The pointed ears stuck out and would seriously hurt anyone who tried to grab her as she made her way to her car. One of the nurses at the hospital had the self-defense tool on her own key chain, and Sarah had ordered it the same day she’d seen it.

Hating that she felt so vulnerable and unsure—she never used to feel this way all the time—Sarah picked up her pace as she hurried toward the parking lot at the end of the block. Even though it wasn’t quite dark yet, the overhead lights illuminated the sidewalk. Every step felt as if she were walking through molasses. She was exhausted after working all day and wanted nothing more than to climb into her bed and sleep for eight hours straight.

Surprised at the sound of someone calling her name, she turned and saw a man jogging down the sidewalk toward her.

She should’ve been running away rather than letting him approach. She didn’t know him. Had never seen him before. She would’ve remembered if she had. But she could only stare as he got closer. He was taller than her five-seven by at least half a foot. He had black hair and a closely cropped beard. The focused attention in his green eyes kept her rooted to the spot.

He was wearing a pair of sweatpants and a black T-shirt with some sort of logo in white on the front. His arms were covered in tattoos, but she couldn’t see what the designs were, as he was moving too quickly. His biceps bulged as he jogged toward her, and she had no doubt he was muscular all over.

Her fingers tightened on the modified brass knuckles in her fist, and she held her breath as he got nearer. She should’ve ignored him. Should’ve kept walking . . . but she was fascinated by how much he immediately reminded her of her father. Not necessarily in looks, but in the way he stared at her, as if she were the only person currently on the face of the earth. She hadn’t been on the receiving end of a look like that in ages.

The first time she’d met her dad, when she was six, he’d gone to his knee in front of her and promised she’d be safe with him. Something about the look in his eyes had made her believe him on the spot.

And she was seeing the same promise in the eyes of the man coming toward her. That was crazy . . . wasn’t it?

“Sarah, right? Sarah Butler?” the man asked as he stopped in front of her.

“I’m Cole Johnson.” He held out his hand.

Sarah looked down at it and swallowed. She didn’t want to do this, but she couldn’t be rude. She uncurled her fingers from around the self-defense weapon and switched it to her left hand. Then she reached out and shook Cole’s hand.

His fingers were warm, and she could feel the calluses on his palm as he gently pumped her hand. “I’m sorry,” he said in a soft tone. “I’m assuming you overheard my conversation with Carrie.”

It wasn’t a question, but Sarah nodded anyway. Cole was still holding her hand, as if he were afraid the second he let go, she’d bolt.

“I’ve told her a million times to make sure my office door is shut when she comes in to talk to me, but obviously she forgot.”

Sarah tugged on her hand and wasn’t sure Cole was going to let go of her for a second. But he finally loosened his hold enough for her to reclaim her hand.

She wasn’t sure what he wanted to hear, so she kept her mouth shut. Mike and Jackson had told her often enough that if she didn’t have anything nice to say, she shouldn’t say anything at all. She’d taken their words to heart and very rarely said the things she was thinking.

Cole apologized again. “I was a dick. I’m sorry. In my defense, my partner has been out of town for the past week, and I’m drowning in administrative stuff that she usually takes care of. I also didn’t know it was you. Carrie didn’t give me your name when she said you were here. That’s not a good excuse, though.”

Sarah pressed her lips together and nodded. He was right, it wasn’t a good excuse. They had an appointment. It wasn’t as if she’d walked off the streets and demanded he spend an hour of his precious time with her.

He winced. “Look, you have a right to be pissed. I want to make it up to you. Come on back to the gym, and we can talk.”

Sarah took a deep breath and found her voice. “It’s okay. You’re busy and don’t have time right now. I’ll just come back some other time.”

Cole regarded her for a long moment before saying astutely, “I have a feeling if I let you go right now, you won’t be back.”

Sarah refused to feel guilty. He was right, she had no plans to come back to Rock Hard Gym for the self-defense lessons she so badly needed. But she wouldn’t lie to him either. So once again, she kept her mouth shut and simply stared back at him.

Cole sighed. “Look, I can’t lie, I’m busy. I’ve got a million things going on, and I double-booked my schedule tonight. But the day I’m too busy to help a woman who needs self-defense lessons to feel safe is the day I might as well quit and find another occupation. Also, I’m the boss, but I suck at delegating. You coming back and talking to me right now will save me from having to do other administrative work I’ve been putting off.”

She eyed him skeptically.

He smiled—and her knees almost gave out from under her. She’d thought he was good-looking before, but when his lips quirked upward in a genuine smile, he was drop-dead gorgeous.

“What about the interview you’ve got set up?”

Cole shrugged. “I’ll have Carrie do it. She’s the one who’ll be working with him. I’ve got the questions I’d planned to ask printed out already, so I’ll just give them to her, and she can conduct the interview. It’ll be fine.”

Sarah hesitated. Her bed called out to her. She wanted nothing more than to go home and bury herself under the covers.

“Please? I’ll feel terrible all week if you don’t let me make this up to you,” Cole begged.

“Great!” Cole exclaimed. He stepped back and held out a hand, indicating the sidewalk behind him. “After you.”

With the oddest feeling that this decision would somehow change her life, Sarah fell into step with the man beside her as they headed back to the gym.