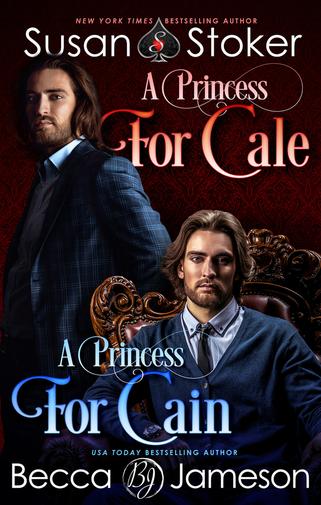 Get TWO stories in this one collection.

A Princess for Cale by Susan Stoker
Katelin Kriss comes from nothing—literally. A lifetime in foster care has ensured she’s used to little notice. So when she develops a crush on a real-life prince, she expects him to remain her favorite fantasy. After all, what can she possibly offer a man who has everything?

Prince Cale Alexander and his twin brother, Cain, noticed Katelin and her best friend weeks ago, in a local bar, and both have been wanting from afar ever since. Before Cale can approach his shy beauty, the women are caught in a dangerous situation that thrusts Katelin first into his arms…and then into his bed.

Cale will never be king, but he still wants the fairy tale…with his princess, Katelin.

A Princess for Cain by Becca Jameson
As a royal prince, Cain Alexander has everything he could possibly want at his disposal. But he and his twin brother have always felt something was lacking. After spending their childhood under the watchful eye of the royal court, the two of them break the mold and head to America where dreams are made.

Shayla Peters had a rough start in life. Raised primarily in foster care, she and her closest friend have aged out of the system, gotten jobs, found an apartment, and forged a life.

What neither Cain and his brother nor Shayla and her friend can easily control is finding the right person to spend their lives with. They come from different worlds. They have incomparable backgrounds. But love doesn’t care. It worms its way into the soul without invitation.

Is it enough though? The probability of two such different people coming together in a parallel path is slim. Do Cain and Shayla have what it takes to defy the odds?